Kids’ playground goes back to nature

01/04/2012 2:02
Kids’ playground goes back to nature
“People of all ages can enjoy it. It’s not just a structure for two-to five-year-olds.”
Excerpts below -the full article can be read from the link above 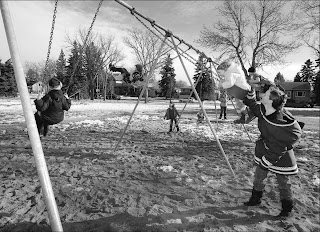 Kory Baker-Henderson pushes her three-year-old daughter, Kaleena, at Donnan Park recently. The playground soon will be converted to become Edmonton’s first “natural playground.”
Children won’t find new monkey bars and bright plastic play structures at the upgraded Donnan Park.
Instead, the aging playground at 9105 80th Ave. will become Edmonton’s first “natural playground,” part of a growing trend in playground design.
Children in the redesigned Donnan Park will entertain themselves with such timehonoured playthings as rocks, sticks, sand and dirt. The overhauled space will feature a slide built into a hill, a sideways-growing tree, a boulder spiral, a hand pump to pour water into a small stream and plenty of plants, trees and greenery.
“Studies have shown imaginative play is much more stimulated (in natural settings) and children actually will play longer and become much more involved than on a typical red, plastic slide structure. Their games will just get much more imaginative. There’s that connection with nature. We have plans for a community garden, so it’s a learning and teaching tool, too.”
Community volunteers have already secured two grants and are collecting donations to fund the natural playground that should cost between $50,000 and $100,000.That’s far cheaper than a traditional, prefabricated play structure which can cost $200,000 or more, says Baker-Henderson.
The natural playgrounds meet all the regular safety standards, says company founder and principal designer Adam Bienenstock.“We’re seeing injury rates drop at schools where we’ve made this change from asphalt, plastic and steel to mulch, grass, rolling hills and boulders and logs as climbers,” Bienenstock says.
Studies have shown children are also less aggressive and less likely to bully each other when they are spread out in natural settings instead of being clumped together and vying for space at the top of prefabricated play structures, Bienenstock says. “The truth is, you put kids into the woods and they get better. It’s not that complicated.”
Efforts to better connect kids with nature have attracted attention as people recognize the benefits that spring from the outdoors, ….“It’s just so simple. It just allows kids to collect bugs, to find earth-worms, to see things grow, to plant seeds and see vegetables grow, to have shade from a tree,…..People are sometimes looking for alternatives to the highly technical world kids are in more and more, realizing of course that connections to nature are important and perhaps slipping away.”