With a greater development of Australian inner city areas I have noticed an increased trend to integrate childcare centres, including the playspace, within the new residential/commercial complexes, both usually above ground level. I understand that the creation of indoor playspaces may be paramount in areas of the world that experience extreme temperature variations but this is an emergent and challenging trend in Australian childcare design. Challenging and rewarding in that I have been able to work with developers and architects who are aware of the benefit of natural playspaces and are happy to consider them integral components of any new centres’ design.

“New state government figures reveal that over three times more homes were completed within the City of Sydney’s boundaries during the first seven months of this financial year than in any of the 41 other Sydney councils . The City of Sydney, which covers just 26 square kilometres, is adding new homes at the rate of 100 per week. The figures underscore the growing dominance of multi-unit housing in the Sydney property market. In the first seven months of 2014-15 more than two thirds of all dwelling approvals in greater Sydney were for multi-unit developments.”

The change in need is recognized by many  Sydney metropolitan councils, in particular Sydney City Council. In a 2013 Assessment it commissioned into the projected need for childcare in their LGA the report states  “There are a total 1,054 places planned across the City’s Village Groups through Development Applications (DAs) currently with the City. At the time of this study, there were four approved DAs where work has commenced on the building equating to a minimum 258 places.” http://www.cityofsydney.nsw.gov.au/__data/assets/pdf_file/0007/189835/CCNA-7-Nov-2013.PDF
In recognition of the need, and acknowledging the restraints, that Councils’ Developmental Control Plan (DCP) states,  “The City of Sydney has approached the challenge of site suitability in a way that responds to the unique local context. The Child Care Centres Development Control Plan (DCP) 2005, acknowledges the need to cater for the child care needs of resident and workforce populations. Recognizing the higher density and constrained land supply in the area, the DCP provides for child care facilities to be located above ground floor, particularly in the central business district and surrounding high density areas where there are large employers. The DCP allows approval for above ground child care facilities with indirect access to open space if there are no viable alternative sites.
http://www.cityofsydney.nsw.gov.au/__data/assets/pdf_file/0012/142041/Guidelines-Childcare-Centres.pdf
Many metro council’s require that any indoor play areas should, ” have access to sunlight, natural ventilation and views to the outdoors, have convenient access between the indoor and outdoor areas, and enable clear lines of sight to allow for staff supervision from other areas of the child care centre”.
In the past few years I have designed a total of 10 -15 enclosed and semi-enclosed playspaces, half in the city of Sydney LGA. All of the centres were created in response to an increased population density, a need  for childcare from the new population centre and an inability to create traditional centres due to lack of suitable existing sites or land availability.
In the process of design collaboration, a few essential truths have emerged in respect to the success or failure of proposed centres. These are summarized below:
Montessori Academy -Victoria Park childcare centre was designed in 2013,  Approved for construction in 2014 and built later that year. It was licensed in early 2015 and has been operating continuously since then. The Centre is on the Fifth floor of the East Village complex and overlooks South Dowling Street & the Eastern Distributor Motorway
The East Village playspace was designed to have an open ventilation system, Low-E glazing and a built-in irrigation system so the plants get all they need to keep them growing.
The design included a large green wall to help to cool and oxygenate the playspace and plenty of opportunity to play with two sandpits, log steppers for seating and climbing, timber balance beams and slides. The design included hidden quiet areas and areas for meditation.
The design included raised garden beds to host a number of sensory native trees, shrubs, grasses and climbers and separate raised beds to be used for growing edible herbs and veggies.
It was great to get to see the completed centre, speak to the director and take the photographs attached below. 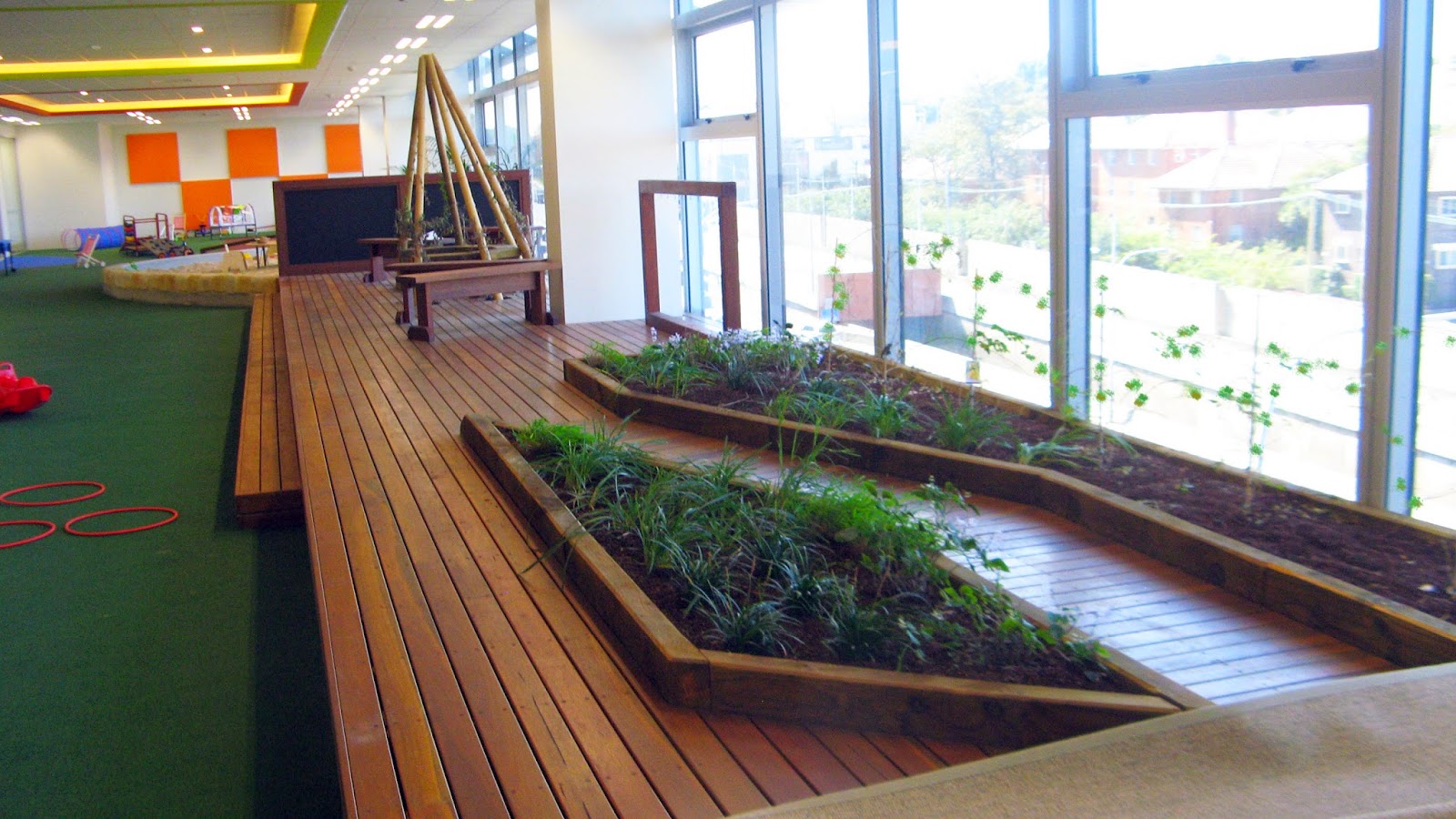